INGRID ANDRESS ANNOUNCES US LEG OF THE LADY LIKE TOUR

With her “elegantly written” (New York Times) single “More Hearts Than Mine” rapidly approaching Top 25 at country radio, Warner Music Nashville / Atlantic Records breakthrough artist Ingrid Andress is sharing more exciting news today. Having just returned home fromcompletely sold-out shows in the UK, fans in the states will now be able to catch her out on the road for The Lady Like Tour Part II through December. With tickets on-sale this Wednesday (10/2), stops will include major markets such as Boston, San Diego and New York City, where Andress is currently featured on NASDAQ’s Times Square billboard. 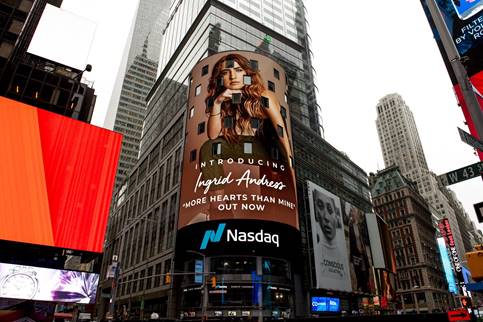 The acclaimed singer/songwriter can also be found in this month’s ‘Women in Music’ issue of worldwide lifestyle magazine ELLE (READ HERE). She recently celebrated the release of her Rosebank Acoustic Sessions (LISTEN HERE), a three-song project that showcases stripped-down versions of “Lady Like,” “Both” and “More Hearts Than Mine,” which totals nearly 30 million on-demand streams to date.

"A country pop rookie who can write a chorus like Sia," (PAPER), Ingrid Andress is chipping away at expectations of herself and her sound with debut single “More Hearts Than Mine.” Praised by HITS magazine for its “honesty and vulnerability virtually absent on Country radio,” the recently named iHeartCountry On The Verge artist performed her “elegantly written song” (NY Times) on NBC’s TODAY a week after it became the most-added new single at country radio. The Atlantic Records/Warner Music Nashville recording artist made her first national TV appearance earlier this year on Late Night with Seth Meyers performing her major-label debut, “Lady Like,” only two months after its release. With several co-writer credits to her name, including Charli XCX’s “Boys” and FLETCHER’s “About You,” the Colorado-native first honed her skills writing with heavy hitters in the music community such as Sam Hunt and Alicia Keys and has received additional critical acclaim from People, Rolling Stone, Billboard, Vulture, and many more. With the release of her latest tracks “Both” and “We’re Not Friends,” Andress’ new music continues to prove her as one of the most unique and moving vocalists in the country space and beyond; one that is thrillingly honest, raw and refreshing in a way rarely seen emanating from Music City.